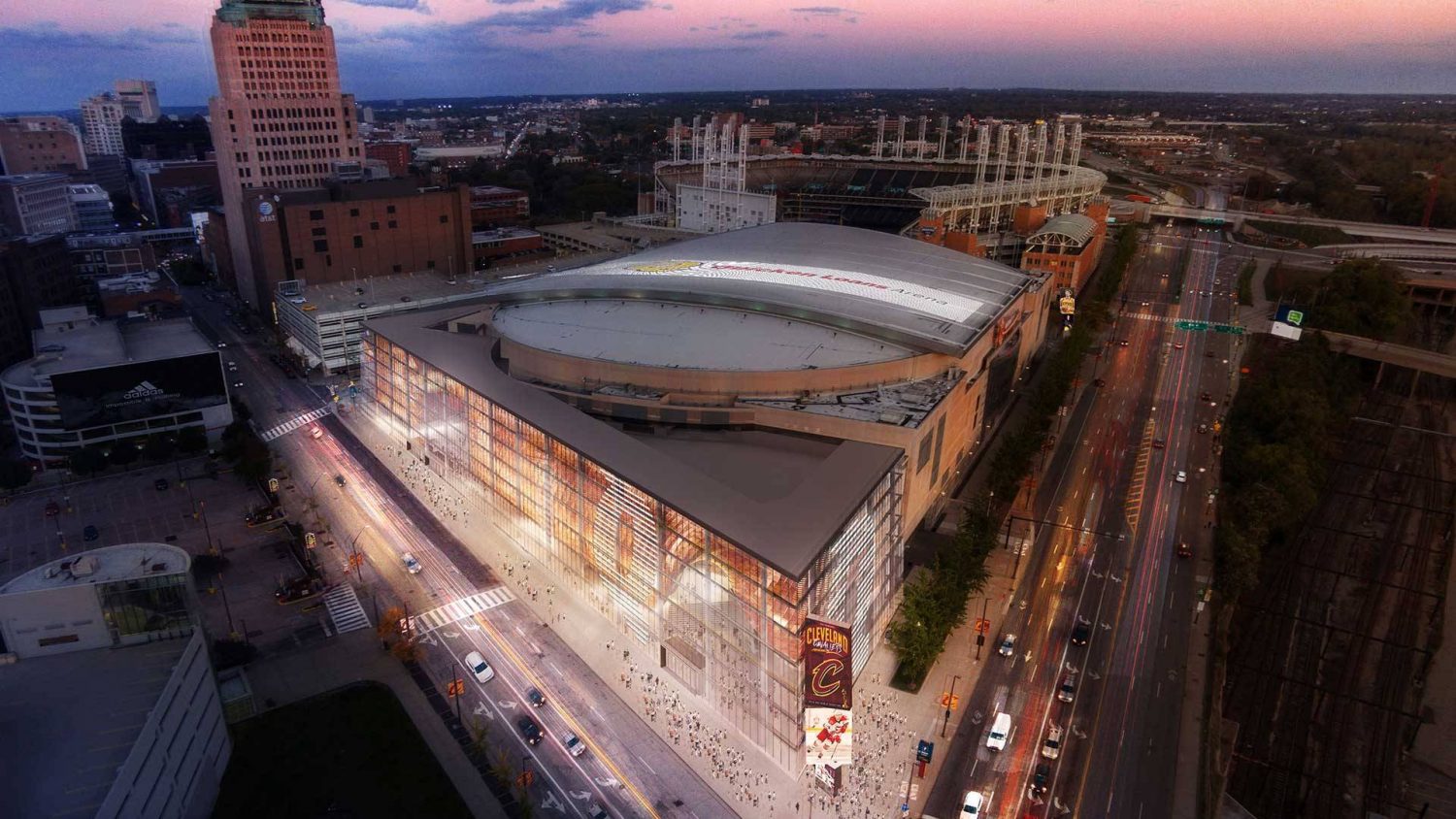 The Cleveland Cavaliers are asking county and city officials to support their plan for a major upgrade to their arena.

In mid-December, the Cavaliers announced a proposal to transform Quicken Loans Arena (The Q) into a larger and more fan-friendly venue. The renovation is expected to cost around $140 million, with the Cavs and taxpayers splitting the cost.

The plan calls for Cuyahoga County and Cleveland to be responsible for $70 million, while the Cavaliers will pay the other half and any cost overruns.

Upgrade work on The Q will include alleviating crowded concourses, creating pre- or post-event space for visitors, eliminating outdoor lines to enter the arena, enlarging entrance areas, eliminating navigation difficulties within the facility and creating street activation and interaction within the neighborhood.

Architectural renderings from the firms SHoP and Rossetti show a modernized Quicken Loans Arena with a new glass façade extending to Huron Road, from Ontario Avenue to East 6th Street.

Other renderings showing interior improvements reveal Loudville, an upper level section of the building, will open into the bowl, where fans will be able to sit together and watch the game. Concourses will be widened to create what the Cavs are calling “Neighborhoods,” areas where fans can gather to hangout, eat or drink.

Wondolowski estimates the project will take about six to eight months to complete.

The improvements will bolster the arena’s ability to attract additional national and international events, like the Republican National Convention, a future NBA All-Star game, major concerts and more.

The Cavaliers feel now is the best time to update the 22-year-old arena, which was ranked by Pollstar Magazine in 2015 as the 33rd busiest arena in the world and the 13th busiest in the U.S. in terms of live entertainment activity.

The building hosts more than 200 diverse ticketed events and over 1,400 private events a year, including concerts, family shows, major conventions and other sporting events that bring more than 2 million spectators – many from outside of Cuyahoga County – to downtown Cleveland each year.

It is one of Cleveland’s top economic generators.

The official website of this project, theqtransformation.com, says in 2016, “The Q generated $245 million in direct spending and $44 million in state, county and city tax revenue from different streams, including income, sales, admission and hotel bed taxes. Since the arena’s inception in 1994, The Q has delivered an estimated economic impact of $2.7 billion in direct spending, helped create and support 2,500 jobs annually and generated nearly $500 million in tax revenue.”

Quicken Loans Arena, which was built under a PLA with the Cleveland Building Trades, is one of the oldest facilities in the National Basketball Association (NBA), as it officially opened its doors to the public in 1994.

TheQTransformation.com lists The Q in a tie for the second oldest non-renovated NBA venue with the United Center (Chicago), trailing just the Vivant Smart Home Arena in Utah.

Three other arenas were built before The Q, but have all undergone major renovations. Madison Square Garden was built in 1968 and upgraded in 2013, while the Target Center opened in 1990 and was renovated in 2016 and U.S. Airways Arena was constructed in 1992 and modernized in 2003.

The Gold State Warriors, who lost to the Cavs in seven games in the NBA Finals, are moving into a new venue in 2019, leaving their 51-year-old arena.

The Cavaliers say a $140 million investment is cheaper than building a new arena, which can cost anywhere from $500 million to more than $750 million.

The website says Dan Gilbert, majority owner of the Cavaliers, agreed to a renegotiated lease that saved the public tens of millions of dollars and is considered to be among the most “public friendly” sports leases in the country.

The ball is now in Cleveland and Cuyahoga County’s court. Wondolowski said both governing bodies will meet to discuss the project and said the Cleveland Building and Construction Trades Council will be at the meetings to take part in the discussion.

The modernization of The Q, which is a taxpayer-owned building, will also have to go before the Cleveland Planning Commission.

By agreeing to the project and partnering with Cleveland and Cuyahoga County, the Cavs would extend their lease to 2034, meaning they will play at least 40 years in The Q.

The Cavs want to begin construction following what they hope is another championship season. Wondolowski estimates the work will create between 150-180 jobs.