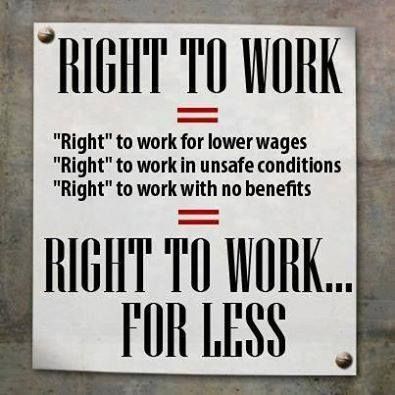 Ohio’s union workforce came under attack in Feb. when a state legislator introduced a So-Called “Right to Work” bill to the General Assembly.

If passed, HB 53 would make Ohio the nation’s 29th Right to Work state.

With the exception of Pennsylvania, all other states surrounding Ohio have enacted So-Called “Right to Work” laws.

Becker introduced the same legislation during the last session, but as the Dayton Daily News reported, the bill “failed to gain traction.”

Since the overwhelming defeat of Senate Bill 5 in 2011, Gov. John Kasich has repeatedly said a So-Called “Right to Work” law is not on his agenda.

So-Called “Right to Work” laws prohibit worker security agreements between labor unions and their employers and strip workers of protections afforded by unions.

Individuals who directly benefit from union negotiations are currently required to pay a “fair share” to the union to cover just the cost of contract representation.

Becker’s bill would force dues-paying union members to subsidize services to non-union employees.
The legislation could cost unions thousands of dollars in fees and it could cost workers even more.

So-Called “Right to Work” laws also lead to less safe working conditions. According to the Bureau of Labor Statistics, the rate of workplace deaths is 49 percent higher in states with such laws.

“’Right to Work’ will only lead to lower wages and less worker friendly conditions. It’s clearly a move to defund labor unions and empower corporations,” said Dave Wondolowski, Executive Secretary of the Cleveland Building and Construction Trades Council.
“Building Trades Unions will definitely feel an impact when attempting to organize non-union contractors and their employees,” said Wondolowski. “We will work hard to defeat the bill.”

The introduction of HB 53 came after West Chester Township, located in Southern Ohio, tableda resolution to make their municipality a So-Called “Right to Work” jurisdiction.

Hundreds of union members, including building trades members, packed the West Chester Township Hall on Jan. 25 to voice their opinion and explain why “Right to Work” is wrong.

According to the Cincinnati Enquirer, Trustees tabled the resolution following the appeal of a federal “Right to Work” case by unions.

Trustees acknowledged the matter could take years in court, and depending on the outcome, could render their resolution moot.